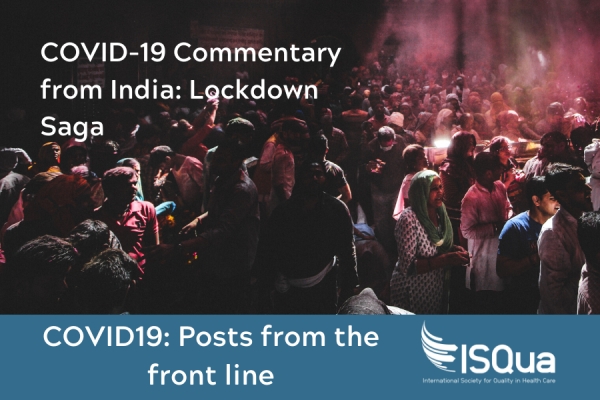 India is a country of countries. Don’t get surprised. It is made of 28 States and 8 Union Territories, a total of 36 entities. Each of these are different in culture, culinary, language, outfit, style of living, weather and health systems. Each one of these are like different countries. However, each one is tightly bonded with each other for several reasons. We truly represent ‘unity within diversity’. COVID-19 has perhaps further brought all of them together to fight with this deadly disease.

Each State & UT followed directives of the Central Government for the lockdown. India has done better so far in containing the virus compared to several countries but lagged behind from many. We have huge challenge of massive population with densely populated geographical area. Let’s have a look at the numbers since this most contagious microorganism named SARS-CoV-2 causing COVID-19 disease has surfaced officially in India. Not the mention that political grounds were not easy for the Central Government though Epidemic Diseases Act, 1897 came handy and State governments and political parties did not have any option but to follow directives of the Central Government in the best interest of its citizens.

30 January 2020, India reported its first confirmed case of COVID-19 in Kerala, one of the State in down South, with travel history to Wuhan at the time when the world has 7818 confirmed cases. By 3 February, India had three cases. All three cases were in Kerala and they were students who had returned from Wuhan, China. Kerala did well and perhaps their preparedness during Nipah outbreak came handy.

We were perhaps a silent spectator during February. Not much attention paid, may be no one knew the nature and behaviour of SARS-CoV-2 and did not expect if it was more serious issue than the one in ‘Contagion’. This novel coronavirus was at his work quietly at all the time. We the human, the most intelligent species known to exist on the earth, were busy with our business as we never imagine that sky is going to fall and this coronavirus will put the world under unprecedented series of ‘lockdowns’. The transmission started escalating during March, after several cases were reported all over the country, most of which were linked to people with a travel history to affected countries. I talk to myself and said ‘we could have paid serious attention on 30 January when the first case was found’. I personally feel that we could have started restrictions and a close monitoring that time and could have closed our skies to stop importing the virus. I know that it was not an easy decision to take in view of several factors including trade and economy but perhaps that was warranted. Might be controlling this virus would have been easy and at a less cost to us compared to what we had paid and may continue paying now. This is just my hypothesis and I am sure that our leadership did the best by doing what they were advised by the system as per the limited information available at that point in time.

2 March: Two more positive cases: a 45-year-old man in Delhi who had travelled back from Italy and a 24-year-old engineer in Hyderabad who had a travel history with the United Arab Emirates. In addition, an Italian citizen in Jaipur, who was earlier tested negative, tested positive, making it a total of six confirmed cases in the country. Officials of the Government of Telangana stated that 36 people who had been in contact with the Hyderabad engineer had developed coronavirus symptoms.

11 March, globally, there were 118319 confirmed cases with 4292 deaths; India had a total of 60 confirmed cases with no death. 12 March, A 76-year-old man who had returned from Saudi Arabia became the first victim of the virus in the country. He was a known case of hypertension and asthma, linking the fatality with comorbid conditions.

At this stage, the important question to ask was whether we started sufficient testing?  As per a study published in Indian Journal of Medical Research, 29 May 2020, there were about 250 individuals being tested around this time.

24th March, we had the first nationwide lockdown (1.0), our very first experience, announced from 24 March midnight for 21 days. It was the beginning of an era wherein some countries were trying to learn and adopt containment strategies from other countries and some were experimenting as well.

A Sikh preacher that returned from travel to Italy and Germany, carrying the virus, turned into "super spreader" by attending a Sikh festival in Anandpur Sahib during 10-12 March. Twenty-seven COVID-19 cases were traced back to him. Over 40,000 people in 20 villages in Punjab were quarantined on 27 March to contain the spread.

31st March, a Tablighi Jamaat religious congregation event that took place in Delhi in early March emerged as a new virus hotspot after numerous cases across the country were traced back to the event. Over 9,000 missionaries may have attended the congregation, with the majority being from various states of India, and 960 attendees from 40 foreign countries. According to Ministry of Health and Family welfare, 4,291 out of 14,378 confirmed cases were linked to this event in 23 Indian states and union territories as on 18 April.

20 April, the second nationwide lockdown (2.0) rolled out till 3 May, with conditional easing of restrictions in low risk areas that have been able to contain the virus.

Contact tracing, testing and isolation, the strategy suggested by WHO and adopted by most of the countries was also adopted by India. As per a study published in Indian Journal of Medical Research on 29 May 2020, testing increased from about 250 individuals per day in the beginning of March to 50,000 per day by the end of April 2020. This represented a 200-fold increase in testing over eight weeks. The cumulative frequency of testing was 770 individuals per million population. COVID-19 dedicated hospitals both in government and private were identified by governments in all States. No doubt that hospitals have risen to the occasion.

4 May, the third nationwide lockdown (3.0) was put into action until 17 May. On 5 May, the Koyambedu (Tamil Nadu) wholesale market one of the largest wholesale vegetable markets in the country has become a super spreader of SARS-Cov-2. Almost all the 122 positive cases reported in Cuddalore can be traced back to Koyambedu.  In Rajasthan, the Jaipur municipal corporation identified 10 fruit and vegetable vendors as super spreaders after they infected about 150 persons in the city. Nineteen super spreaders including vegetable vendors, milk vendors and grocery shop workers, became the carrier for the virus in 30 new localities in Ahmedabad, which accounts for about 70% of the total cases in the State of Gujarat that has 8194 on 11 May. In Odisha’s Bhubaneswar, a food delivery boy was identified as positive. In Lucknow, eight persons were infected from a vegetable vendor. In Haryana’s Jhajjar, which had no case till April 24, 11 vegetable sellers who visited Delhi’s largest fruit and vegetable market tested positive for the ‘contagion’ days later.

Countdown Begins with Lockdown 5.0 and Unlock 1.0

We have a huge challenge ahead of us as number of cases are rising and restrictions are easing out. Our Hon’ble Prime Minister laid great emphasis on ‘social distancing’ through the slogan ‘do gaj ki doori- bahut zaroori (a distance of two yards is very important). It is hard to predict what is going to happen after easing out movements, restrictions and opening of businesses. At the time of closing this blog (10.30 AM IST on 31 May 2020), India had 182143 confirmed cases with 86984 recovered & 5164 deaths, and Maharashtra leading with highest cases at 65168 (reported by ‘Aarogya Setu’, an app developed by Government of India with 118.2 million users). A total of 3737027 samples were tested (at 9 AM IST, 31 May 2020 on icmr.gov.in).

In last three months, India has achieved tremendously- everyone had done their bits- salute to all those who are at the front line and also to those supporting from the backend to make a sustainable emergency response system. As per the testing capacity report from ICMR, in January 2020, India had only one laboratory testing for COVID-19, at the Indian Council of Medical Research’s National Institute of Virology, Pune. As on 21 May, there were 555 laboratories across the country, performing molecular tests for diagnosis of COVID-19 - an unparalleled achievement in the history of the Indian health system.

The role of strong leadership at all levels driving down from Hon’ble Prime Minister, health system which responded to emergency, an implemented quality management system and infection prevention & control programme in the hospitals to contain the transmission of SARS-CoV-2 amongst healthcare workers and provide appropriate care to patients, has helped respond to this crisis.

Let’s wait and watch how Unlock 1.0 would impact the scenario. Tough time ahead however, we Indian are well known to win a fight.

More in this category: « Accreditation: How it supported healthcare organizations’ readiness for COVID-19!
back to top