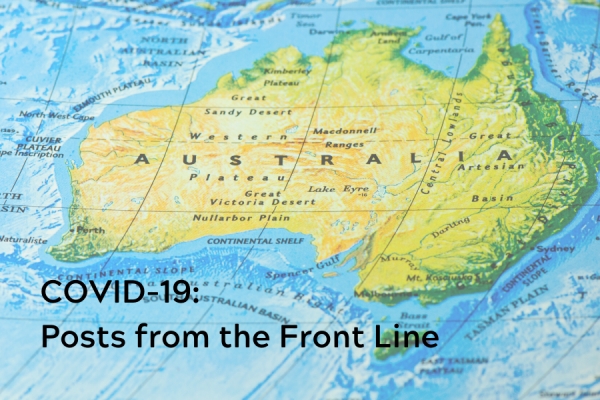 As 1st April 2020 dawned in Australia, I realised it was April Fool’s day. But it wasn’t pranks from my children, friends or colleagues that I was immediately on alert about. It was what everyone does these days, in this era of the coronavirus.

As 1st April 2020 dawned in Australia, I realised it was April Fool’s day. But it wasn’t pranks from my children, friends or colleagues that I was immediately on alert about. It was what everyone does these days, in this era of the coronavirus. It was to see what was happening to the world – like every other day these last few weeks, but with increasing concern.  Quickly scanning my smartphone’s news feed, I read that a 95-year-old woman – someone’s mother, grandmother, friend – had died from COVID-19. This took the Australian death toll to 20 and it will sadly and inevitably be higher by the time you read this.

The Australian numbers are moderate in comparison with many parts of the world. I worry especially about our wonderful colleagues on the clinical frontlines in Italy, Spain and Iran, our neighbours in China and our friends across the Pacific, in the USA, where cases are accelerating rapidly.

But Australians are keenly aware of their position on the timeline. We are two weeks behind what is happening in European countries and must learn from their experience – and those across the Pacific and south east Asian region. No-one should forget that Italy raced from 463 deaths to 1,441 in just six days in early March. But neither should we forget that Singapore, Hong Kong and others have slowed the rate, and Wuhan in China, with a monumental effort, has curved downward.

The Australian government reportedly has the highest per capita rate of testing for COVID-19 in the world, with more than 250,000 tests having been carried out. It’s reassuring to hear but hard to gauge the accuracy of this call, as other countries are obviously doing lots of testing, as recommended by our amazing colleagues in the WHO.

Australia did move relatively quickly to close the borders first to China, then Iran, then South Korea and Italy. By 20th March, the borders were closed further, allowing in only citizens, permanent residents and their immediate family. All international travel out of Australia has now been stopped.

Australia is lucky though – it is a very large country-in-a-continent, and shares no borders with anyone. Many other countries would feel fortunate in a pandemic if their country was surrounded by seas.

Australia has been subject to escalating isolation requirements. This began with a request for people to voluntarily self-isolate at home if feeling unwell. Soon afterwards the policy came out that everyone should work or study from home if possible. Now people returning from overseas are met at the airport and taken to hotels for a mandatory quarantine period of 14 days – because when it was voluntary, not everyone did the right thing.

Australia has also made mistakes.

On 19th March, a cruise ship, the Ruby Princess, docked in the harbour at Circular Quay, in the very centre of Sydney. Over 2,700 passengers were allowed to disembark and quickly dispersed to various parts of Australia and back to their own countries, some flying back to homes in the USA. Very quickly – but not quickly enough – it came to light that some passengers had been tested for COVID-19 while on board, but authorities did not wait for the results before allowing most passengers to disembark.

Since then 440 passengers from the cruise ship, now scattered over various parts of Australia, have tested positive to the virus. Disconcertedly, one passenger unwittingly took COVID-19 into the Northern Territory at the top end of Australia, home to large and vulnerable Aboriginal populations.

Looking ahead more positively, the Federal Government has announced a plan to alleviate the pressure on the public health system and access more hospital beds and equipment by working with the more than 650 private hospitals. It’s a partnership that was unheard of only six weeks ago, but now has been made possible. (It reminds me of that famous proverb, wrongly attributed to Plato, but which is thought to be Latin – “Mater artium necessitas”, or “necessity is the mother of invention.”)

Under this arrangement, private hospitals will take patients from the public system, provide much needed additional intensive care beds and share their stocks of personal protective equipment which are in short supply in the public system. It’s the kind of collaborative approach to the health system that I and many of my colleagues have advocated over many years.

All-in-all, it’s a bit of an unfinished Australian jigsaw puzzle. In truth, only time will tell how well Australia fares in this crisis. But as I read the news on this fine April Fool’s day, it occurred to me that it’s an incomplete picture everywhere. So much uncertainty, so many of the jigsaw puzzle pieces are yet to be snapped into place.

Author: Professor Jeffrey Braithwaite, Founding Director of the Australian Institute of Health Innovation, Director of the Centre for Healthcare Resilience and Implementation Science and Professor of Health Systems Research at Macquarie University; and President-Elect of the International Society for Quality in Health Care.