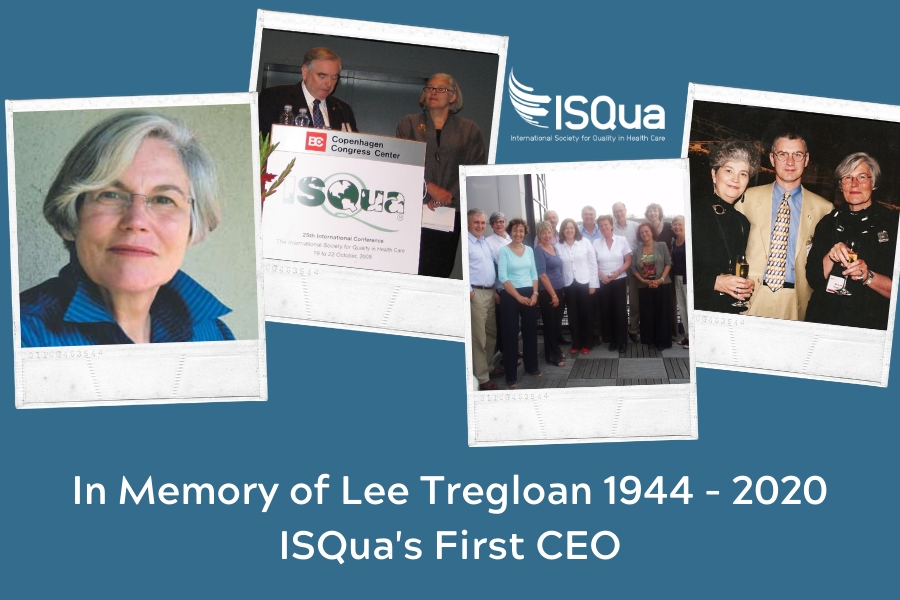 The International Society for Quality in Health Care lost its first CEO and one of its most ardent supporters when Lee Tregloan passed away in Melbourne, Australia on 7th July 2020. Lee was awarded ISQua Life Membership at ISQua's Copenhagen conference in 2008, in recognition of her thirteen years of committed service as our first CEO from May 1995 to April 2008.

For its first ten years, ISQua was run 'off the side of the desk' of the President of the time. A new constitution adopted by the Society in 1993 opened opportunities for institutional members and sponsors to fund a formal secretariat. Thus, in 1994, bids were submitted from the Netherlands and Australia; a three-year agreement, sponsored by the Australian Federal Government and the State of Victoria, made possible a permanent secretariat with a permanent CEO.  Lee was named as the first CEO.  At the time of her appointment, Lee had no background in "quality assurance" (as it was then termed) or international networking but had valuable experience in linking professional associations as Executive Director of the Australian Association of Speech and Hearing (now Speech Pathology Australia) from 1990 – 1995.

Lee established the international office in Melbourne and worked with successive Presidents and Executive Boards to lay the foundations for rapid development and expansion. Supported and driven by Lee, the Society's credibility and impact grew rapidly. Much of ISQua's rapid surge stemmed from Lee's capacity for communication and her knowledge of systems which made corporate structures and activities more effective and efficient. For the first time, the Society became financially and organisationally stable; communications improved; the Society's journal arrived on time; AGMs became more business-like, and members were happier.

Two-monthly Board teleconferences became more productive with Lee's meticulous attention to circulating background papers and a clear agenda (despite the then existing limits of international communication).  ISQua members were delighted by the introduction of regular newsletters and bulletins, and access to the ISQua website. Transferring publication of the Journal from Elsevier to Oxford University Press in 1998 challenged the secretariat – and the Board – to negotiate legal contracts between the Society based in Melbourne, the editor in Harvard and publisher in Oxford.

One of Lee's early tasks as CEO was to help unravel the finances of the international conference which was held in Venice the previous year and to support preparations for the 1995 conference in St John's, Newfoundland, Canada where she made her debut.  ISQua regional meetings with national organisations were held in Sydney, London and Budapest - where the European Society was founded. Lee converted the corporate memory of conferencing into a systematic process for designing, delivering and documenting international meetings. This helped to steer planning for the meeting in Jerusalem, which was to be hosted jointly by Palestine and Israel in 1996. Regardless of careful planning, the meeting was further complicated by the closing of the Israeli border to Palestinians the night before the conference began. Rapid diplomacy and conference reorganisation was called for which involved despatching key speakers to huddled masses across the border to Ramallah in Palestine.

Attached to the Venice conference was the first meeting of national accreditation programmes in Treviso. This began a discussion of relationships with ISO certification, research and marketing of healthcare accreditation systems and the need to harmonise standards and external assessment processes. Thus emerged the ALPHA programme (Agenda for Leadership in Programs for Healthcare Accreditation) which developed into a recurring conference theme, development plan, programme implementation, and new income stream. Lee was co-author (with Barbara Donaldson) of the 38 page "Draft policies and processes for accrediting the accreditor" which laid the foundations of the International Accreditation Program in 2000.

Lee had a winning talent for engaging and understanding people and organisations.  This was evident in negotiating partnerships with governments, ministries and NGOs. Lee worked closely with WHO headquarters in Geneva especially to help delegates from lower-middle-income countries to attend ISQua conferences and also for WHO's commissioning ISQua to research and publish a global review of quality and accreditation in health care services in 2003. Lee and Chris Brook negotiated with the Australian Federal Government and the State of Victoria to renew their three-year sponsorship not once but twice to ensure stable funding and governance of the Society. Then she devoted her efforts to support (with then ISQua President, John Helfrick) international invitations to take over financial responsibility for the secretariat from Australia and subsequently to facilitate the handover and transfer of the secretariat to its present location in Dublin.

ISQua was conceived with WHO and founded in Europe, but with close contacts in the American Joint Commission and International Hospital Federation. Some members feared that the Society had been lost when Australia "turned the world upside down" and agreed to fund the secretariat. Lee was quick to see the need to alleviate those doubts and to reaffirm a European and global role. Members, in turn, were quick to appreciate what Lee brought to the Society.

Lee's passing marks a significant milestone for ISQua.  She was integral to the early growth and success of the Society and laid the groundwork upon which those that followed her were able to build. Lee's contributions will be further recognised at a future annual meeting where we can celebrate her life and contributions.

Our thoughts and sympathies to go her family and friends. May she rest in peace.