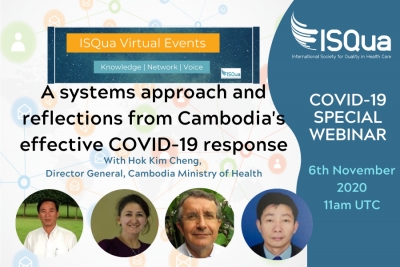 About the session
From January to October, Cambodia had only 283 coronavirus cases —70% of which were from people traveling from outside of the country, and the rest of which could be linked to those cases. Even as sporadic cases continue to be detected in travelers returning at the border, Cambodia’s rapid and whole of government approach—test, isolate, trace, quarantine, and care —has kept numbers low.

This session will discuss recent health systems strengthening approaches used in Cambodia as it confronts it’s needs for a rapid and effective response for testing, awareness raising, data demand and use, and most importantly building better for the new normal. In Cambodia, we adopted a health systems approach for improving the supply of viral transport media (VTM), distribution of personal protective equipment (PPE) through a community-based response system and distance learning through a learning hub for health staff stationed in provincial and referral hospitals. Additionally, we supported the Ministry of Health to accelerate development of guidelines and training of both public and private health providers.

Learning Outcomes
By the end of the session, participants will be able to have a better understanding of the epidemiology, implementation of response and feasible approaches to strengthen the resilience of local health systems in low- and middle-income countries (LMICs).

Watch the recording below:

Dr Ly Sovann is currently the Director of the Communicable Disease Control Department of Ministry of Health (MOH) in Cambodia and has served as MOH Spokesperson on issues related to communicable outbreak and response. His expertise in disease surveillance goes back to 1995, and he has since been the Head of the Communicable Disease Surveillance system and the Coordinator of SARS Control in Cambodia, as well as the Chief of the Disaster Unit at MOH.

Dr Sovann has conducted research on many national and international projects, including a study on aspirin abuse in coordination with the Khon Kaen University in Thailand; a prevalence study on Leptospirosis; and outbreak investigations for diseases such as cholera, ARI, SARS, and avian influenza.

Premprey Suos is a Medical Doctor (Phnom Penh, 1988-1995) with Master of Sciences in Epidemiology from University of California, Los Angeles, United States of America (UCLA, 2004-2006). He joined FHI 360 since October 2018 as Deputy Chief of Party of the USAID Enhancing Quality of Healthcare Activity (EQHA). Previously, he worked at the Australian Embassy, Cambodia, as a senior program manager for health (2009-2018) who was in charge of Australian Aid’s health system strengthening programs/portfolios and contributed significantly to strengthen the Cambodian health systems. He also spent for 11 years with the National Center for HIV/AIDS, Dermatology and STD (NCHADS), Ministry of Health, (1998-2009) as a key person in leading the scaling up of HIV/AIDS care and treatment in Cambodia in early 2000s and almost 4 years as a senior clinician at Infectious Disease Department of Sihanouk Hospital Center of HOPE (1999-2002).

Laurent Ferradini is a French citizen, MD, Dermatologist with a PhD in Immunology. He joined FHI 360 and LINKAGES Indonesia since September 2018 to work as Senior Technical Advisor and is working since March 2020 as technical coordinator for USAID Emergency Fund COVID-19 under EQHA in Cambodia. Previously, he has been working with WHO in Cambodia as HIV-Hepatitis-STI team leader (2015-2018), with FHi360 (2008-2015) and with Doctor Without Border (MSF, 2006-2008) for the past 12 years providing assistance to the government of Cambodia to implement the continuum from prevention to care and treatment to achieve the 90-90-90 targets and HIV elimination. Before that, he has been working as epidemiologist in charge of HIV operational research at Epicentre and MSF headquarters in Paris during the early 2000 years (2003-2006) and as a researcher in Immunology (1992-2003).

Nilufar Rakhmanova is Chief of Party of the FHI 360 Enhanced Quality of Healthcare Activity (EQHA). She leads the USAID Flagship project with a consortium of five international partners: FHI 360, PSI, I-TECH, mClinica and Meridian. With more than 18 years of professional experience in the global health and Health Systems Strengthening (HSS), she previously served in FHI 360 Washington, DC, as an HSS Technical Advisor to TB, HIV, MCH, NCD public health programs in over 15 countries in Africa, Eastern Europe, Central Asia, and Southeast Asia. Prior to coming to FHI 360, Nilufar worked for  USAID, Central Asia Regional Mission as a Tuberculosis (TB) Advisor. She received three USAID Meritorious Awards for excellence in performance and is an Ambassador and a Senior Fellow at the International Society for Quality in Healthcare (ISQua). Nilufar has an M.D. in Pediatrics from Samarkand Medical Institute, Uzbekistan and MPH from Boston University, School of Public Health as a result of the Edmund S. Muskie US Department of State Fellowship.

Are you interested in learning more about patient safety, QI and leadership? Find out more about the ISQua Fellowship Programme HERE.